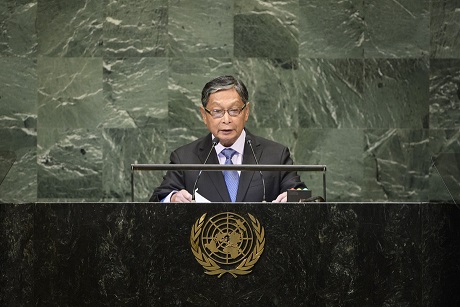 Myanmar has formally called on Bangladesh to increase its role in the repatriation of Rakhine Muslim refugees, who call themselves Rohingya. In a recorded message to the UN Assembly’s annual debate, U Kyaw Tint Swe, minister for the Office of the State Counsellor, called on the government of Bangladesh to take a role in the repatriation process — rather than, his message implied, merely demanding action. “Should Bangladesh commit itself to the bilateral process it will find Myanmar a willing partner. Pressure tactics will be futile. Myanmar does not react well to pressure,” he said.

Kyaw Tint Swe’s statements attempt to relieve Myanmar of some of the responsibility of a largely failed repatriation effort. Bringing back the hundreds of thousands of Rakhine Muslims displaced in 2016 and 2017 is a key step in repairing Myanmar’s image, especially within the United Nations. UN departments and personnel continue to dog Myanmar on the so-called Rohingya issue, including recently, when UN High Commissioner for Human Rights Michelle Bachelet warned of “further war crimes” that are likely still being committed.

The minister spoke out against this ongoing criticism. “Feeding the flames of an extreme polarization in the context of Rakhine (…) can harm the values of peace and harmony in Myanmar. Aggravating the wounds of conflict can undermine unity in Rakhine. Hate narratives are not simply confined to hate speech — language that contributes to extreme polarization also amounts to hate narratives,” a UN News report quoted him as saying.