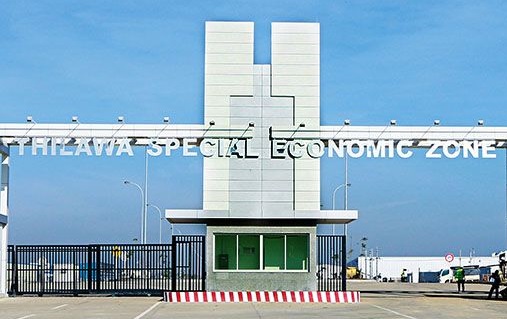 Yangon Region’s Thilawa Special Economic Zone has continued to boom with USD 1.9 billion in total investment. The investment has come from 111 domestic and foreign companies, according to data from the Myanmar Thilawa SEZ Holdings Public Co Ltd.  reported by Eleven Media Group. Eighteen of these companies have plans to expand their investments.

Offering a variety of tax breaks and other trade and production privileges, the in-development Thilawa SEZ is quickly becoming one of Myanmar’s fastest-growing industrial hubs—as well as an economic check against China for other Asian nations, especially Japan. The project has backing from the Japan International Cooperation Agency as well as several major Japanese firms, including Marubeni, Sumitomo and Mitsu & Co. Last month, those three companies—along with local partner Eden Group—received approval to build what may be the country’s largest liquid natural gas power plant.

Meanwhile, Myanmar is on track to meet its foreign direct investment goal of USD 5.8 billion by the end of the current fiscal year (September 30), claims the Myanmar Investment Commission (MIC). FDI has already topped USD 5 billion, according to MIC data. Energy and power have taken up the lion’s share of this, with massive investments in oil and gas, power plants, and power distribution infrastructure.