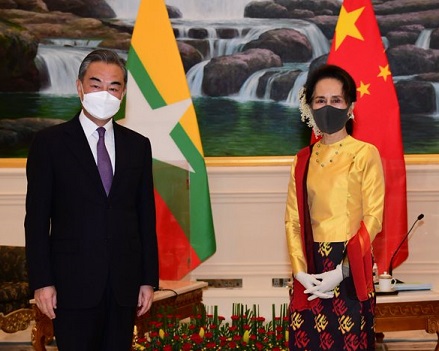 One week before the U.S. presidential inauguration, Chinese foreign minister Wang Yi reaffirmed Beijing’s support for Myanmar in its handling of ethnic conflicts. In a meeting with President U Win Myint and State Counsellor Daw Aung San Suu Kyi, Wang said China backs Myanmar’s decisions and will continue assisting with the peace process where it can. In turn, the Myanmar leaders extended their support for China in Tibet, Taiwan and Xinjiang, according to Xinhua News.

U.S. President-elect Joe Biden is already facing pressure on how his administration will approach Myanmar’s alleged human rights abuses, particularly against Rakhine Muslims. Thus, Wang’s statements are an indirect challenge to the Biden administration: In exchange for its ongoing economic partnership, China is willing to largely ignore Myanmar’s controversies — something the U.S. has not been and likely will not be able to offer.

Yet the implications of Wang’s statements go far beyond the Rakhine crisis. Conflicts in Kachin and Shan states, and chronic tension in Wa State, have a direct bearing on China’s Myanmar interests. Furthermore, China has been accused of sponsoring rebel groups on the western border in a proxy war against India. Thus, when a 2019 outbreak of violence with the Northern Alliance threatened key trade routes, China hosted negotiations and used its own diplomats to attempt to broker peace.