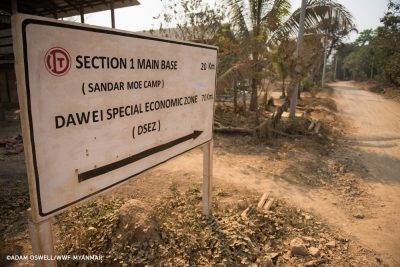 Construction on a new highway from the Dawei Special Economic Zone (SEZ) to the Thai border will begin next year. The highway, which will be backed by a low-interest loan from Thailand, will connect Dawei with the border town of Htikhee, cutting land travel time between Dawei and Bangkok to less than one day, the Myanmar Times reported.

The new highway has been in the works since last year. It will be a key component of the Dawei SEZ and join other new Thai-Myanmar trade infrastructure projects. These include a new bridge across the Moei River and new highways connecting Bago with the border. As for the Dawei SEZ, if completed as planned it stands to be the largest of its kind in Southeast Asia.

Japan has also taken an interest in this new generation of Myanmar-Thai infrastructure, aiming to gain economic ground in Myanmar’s south as China dominates the north. Japan helped revive progress on the Dawei SEZ (which had stalled due to complications with Thai developers) in 2015. Last month it reaffirmed its willingness to invest in the project. In the same month, Japan agreed to loan around USD 265 million for a new bridge across the Sittaung River — another small but important link in the chain of infrastructure helping Thailand and Japan conduct more business in the Golden Land.