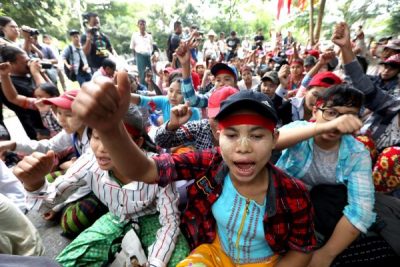 Myanmar Industries Association head U Aung Thein has warned of grave economic consequences of extended factory closures. Speaking to Bloomberg, Aung Thein, whose organization is Myanmar’s largest in the sector, argued against postponing the end of a lockdown that has kept several factories closed. “Many factories in Myanmar have been unproductive since early April and they may collapse if they are not able to operate after May 15,” he said.

The government has already postponed lockdown measures once, extending the moratorium on flights and non-essential businesses to May 15. However, rumors have emerged that the government is considering extending that date as the number of confirmed COVID-19 cases (which, at the time of writing, nears 200) rises. Health experts fear Myanmar’s crowded factory floors could be dangerous vectors for the disease. Indeed, officials conducted door to door sweeps in Insein Township (where many factory workers reside) looking for signs of infection.

Prior to the pandemic, the manufacturing industry, particularly garments, Myanmar’s chief manufactured export, had been showing steady growth. The Myanmar Garment Entrepreneurs Association had predicted that Myanmar’s garment industry was on track to meet its goal of USD 10 billion in exports by 2024. However, worker unrest has been a thorn in the industry’s side. 2019 was a year of demonstrations and strikes with activists calling for greater protections against bosses, better working conditions and a higher minimum wage. A COVID-19 epidemic among Myanmar’s factory workers may not only hamper output, but contribute to the argument that owners and managers put profit above the well-being of its workers.