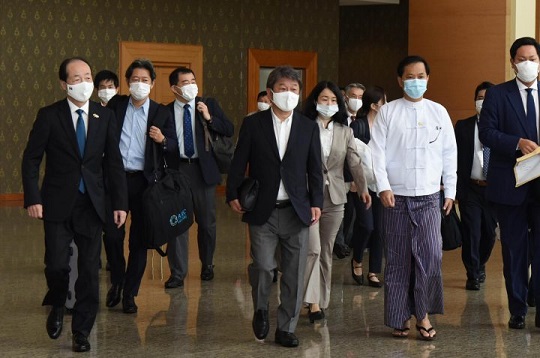 JPY 30 billion was offered for emergency budget assistance and JPY 15 billion for developmental assistance, including soft loans for small and medium sized enterprises, according to a Myanmar Times report. Japan—in the form of the Japan International Cooperation Agency (JICA)—has been a key supporter of Myanmar’s COVID-19 recovery. The new funding comes after a development loan of JPY 30 billion approved by parliament in May. Other major lenders include the World Bank and the International Monetary Fund, which loaned Myanmar USD 556.5 million in June.

The latest round of Japanese assistance is not a one-way street. The foreign minister and state counsellor discussed a new travel scheme for Myanmar technicians and business people traveling to Japan as well as new investment opportunities between the two countries. Despite the pandemic’s damage on the Myanmar economy, Japan is moving forward with high-value investments in Myanmar, especially in manufacturing, power, and energy. In a few recent examples: Japanese retail giant Aeon will soon invest USD 180 million in what may be Myanmar’s largest shopping mall, and in July, a consortium of Japanese companies received approval for the country’s highest-volume gas fired power plant in the Japan-backed Thilawa Special Economic Zone. That SEZ already hosts USD 1.9 billion in current and planned investments.