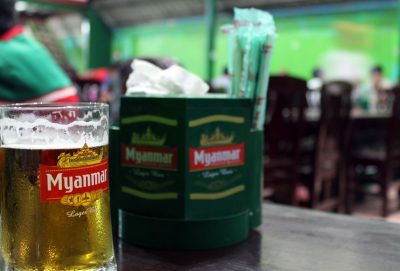 Although it has announced an end to its partnership with Myanma Economic Holdings Ltd., Japanese beverage giant Kirin said it wants to keep selling and marketing its products in Myanmar.

“We are not necessarily exiting Myanmar. We would like to continue contributing to Myanmar through our beer business,” Kirin CEO Yoshinori Isozaki said in a press briefing. Though Myanmar Beer was Kirin’s chief product in Myanmar, its own Kirin beer has been a local fixture. Without the MEHL partnership, however, Kirin will face the same constraints as foreign brands that have fought long, bureaucratic battles to bring their products to bars and store shelves.

Kirin’s desire to keep one foot in the Myanmar market raises questions about the fate of other foreign beverage companies doing business in the country. Myanmar’s democratic era saw the gradual legalization of beer, wine and liquor imports, respectively. Companies like Heineken and Carlsberg were eager to strike deals with local partners, and in 2019 Thailand’s ThaiBev began brewing Chang Beer in Myanmar. The new administration is unlikely to aid Myanmar’s beverage renaissance. And new sanctions could make doing business in Myanmar difficult for brands such as Coca Cola, which fought for decades to bottle and distribute its soda in Myanmar.