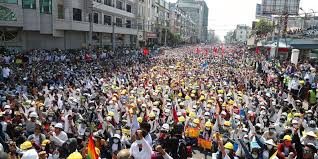 Hundreds of thousands of people took to the streets of nearly every major city on Monday to protest the military coup and call for the release of Daw Aung San Suu Kyi and other NLD officials. The event, which took place on 22/02/2021, was dubbed the “22222 Uprising” by the growing civil disobedience movement, or “CDM,” as it is being called. Images on social media showed tremendous throngs of protestors not only in Yangon and Mandalay, but Pathein, Bago, Taungoo and other major cities.

The protests were preceded by a Tatmadaw (military) warning broadcast on Sunday. “It is found that the protesters have raised their incitement towards riot and anarchy mob on the day of 22 February… Protesters are now inciting the people, especially emotional teenagers and youths, to a confrontation path where they will suffer the loss of life,” according to a piece of English language text that appeared with the message (reported by the Associated Press).

Law enforcement were unable to disperse the sheer number of demonstrators, who shut down traffic and normal business in the busiest sections of Yangon and other cities. Yet hundreds of demonstrators were arrested, and there were sporadic reports of gunfire by police. Although there have been no reported deaths from the Monday event in Yangon, at least two teenagers were shot dead by police in Mandalay.