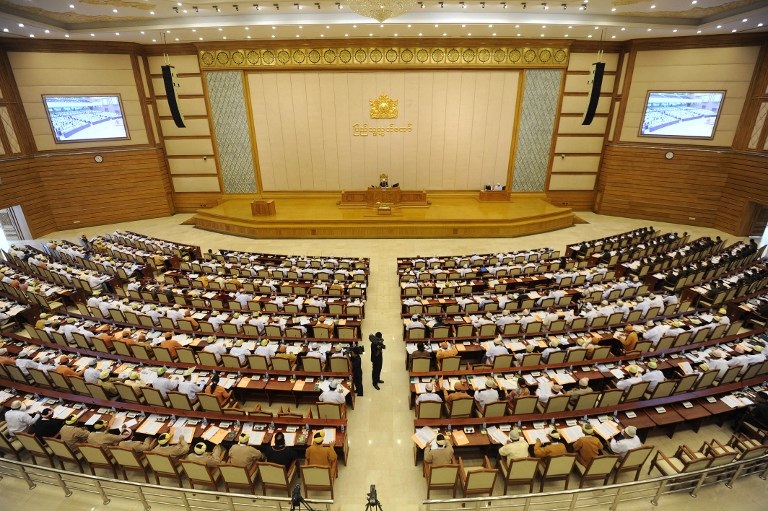 With support from the military bloc, the Union Parliament struck down proposed amendments Tuesday to the 2008 constitution that would have limited the military’s role in politics.

The proposed amendments were written by the NLD-backed Charter Amendment Committee and would have affected the original, military-drafted constitution in various ways. One would have gradually reduced the number of parliament seats reserved for the Myanmar army (Tatmadaw) from 25 percent to 5 percent by 2030. Another would have reduced the powers of the commander-in-chief. However, all but two of the amendments failed to gain the 75 percent majority needed to pass. (The two successful amendments merely changed the wording of the Myanmar word for “disabled”.) The amendment to reduce the number of military parliament seats only gained 62 percent of the vote, indicating opposition from both military MPs as well as the military-backed Union Solidarity and Development Party (USDP).

The amendments represent a year of careful planning by the NLD, heated debate in parliament, and fierce public demonstrations by supporters on both sides. Parliament has not yet voted on the full roster of 114 proposed amendments, and voting will continue until March 20. Remaining proposed amendments include ending the Tatmadaw’s veto power over further constitutional amendments and allowing state and regional parliaments (rather than the president) to appoint their own chief ministers. Yet the military itself and USDP have shown little willingness to diminish the Tatmadaw’s presence in Nay Pyi Taw.