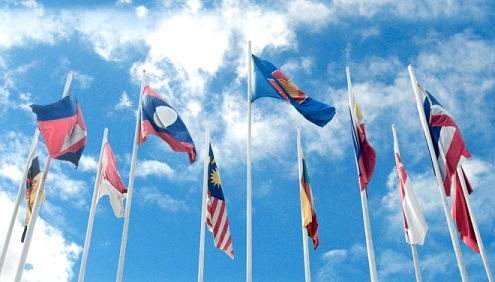 The Regional Comprehensive Economic Partnership (RCEP) was signed on November 15th, becoming the largest ever trade agreement. The 15-member deal includes ASEAN nations as well as China, Japan, Australia, and other countries across Asia and the Pacific, representing 30% of the global GDP or USD 26.2 trillion. The deal was signed virtually at this year’s ASEAN Summit. It will reduce tariffs and consolidate rules of origin, a measure meant to streamline supply chains and trade. The Peterson Institute for International Economics estimates that it could add USD 186 billion per year to the global economy by 2030.

The United States and India are notably missing from the partnership, making it a victory for China in an ongoing battle for global economic influence. Experts see the U.S. absence as a result of President Donald Trump’s administration’s reversal of Barack Obama’s pivot towards Asia, marked by the abrupt withdrawal from the Trans-Pacific Partnership in 2017. “The trade pact more closely ties the economic fortunes of the signatory countries to that of China and will over time pull these countries deeper into the economic and political orbit of China,” Eswar Prasad, a professor of economics and trade policy at Cornell University told Time magazine.

To counter the RCEP, the US has this year tried to revive the Quadrilateral Security Dialogue (The Quad) signed with Japan, India, and Australia after an eight-year hiatus.

India on its side pulled out in order “to protect its industries from being flooded” by Chinese products and services and mentioned the shortcomings and unbalance of the agreement.

China’s successful effort to contain the coronavirus has further positioned it as Asia’s economic leader. “[T]he swift and effective containment of the pandemic allowed the authorities to reopen the domestic economy, while the comprehensive and targeted policy measures provided effective support to firms and businesses, and enabled a strong and broadening recovery,” wrote the ASEAN +3 Macroeconomic Research Office the day after RCEP was signed.

China’s recent gains will likely play out in its investments in Myanmar, which has been a key battleground in the U.S.-China trade war. Indeed, 2020 was something of a watershed year for the China-Myanmar Economic Corridor initiative, culminating in an historic state visit by Xi Jinping. The U.S. has responded with anti-China moves, accusing Myanmar’s largest neighbor of predatory and corrupt dealings. Yet so far, China remains well ahead in the race for the Golden Land.