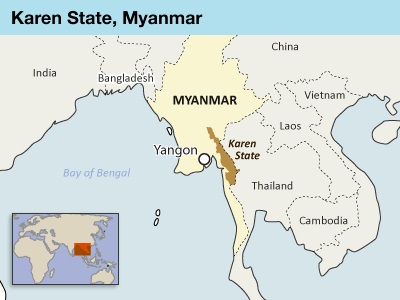 The United States Institute of Peace (USIP), an independent organization funded by the US government, has published a lengthy expose of Chinese business ties to armed groups in Kayin state. The report expresses concerns about lack of oversight and consequences for civilian populations.

The report, published on the USIP web site, spotlights three major industrial projects, including the controversial Shwe Koko casino resort backed by the Karen Border Guard Force. “Although the first of these developments began three years ago, the pace picked up in August of 2019 when Chinese and Cambodian police began cracking down on Chinese firms behind internet wagering, illegal casinos, and gang violence in Cambodia’s Sihanoukville,” it reads.

The first of the developments mentioned is Shwe Koko, a.k.a. the Yatai New City Project, a sprawling, multi-billion dollar resort complex on the Moei River. The second is the Saixigang Industrial Zone Project, which the report claims is a refuge for “Chinese businesses being forced out of Cambodia.” Finally, the report mentions the Huanya International City Project, a casino complex backed by a Karen National Union official who may or may not be operating independently.

“These three projects present a range of concerns for Karen state, Myanmar as a whole, and more broadly, Myanmar’s relations with the rest of the world,” the report continues. “They include individuals with a deep history of involvement in known triads—Chinese organized crime groups—active in the U.S. and now expanding into Myanmar’s Karen State, bringing criminal activity to the heart of Myanmar’s peace process.”